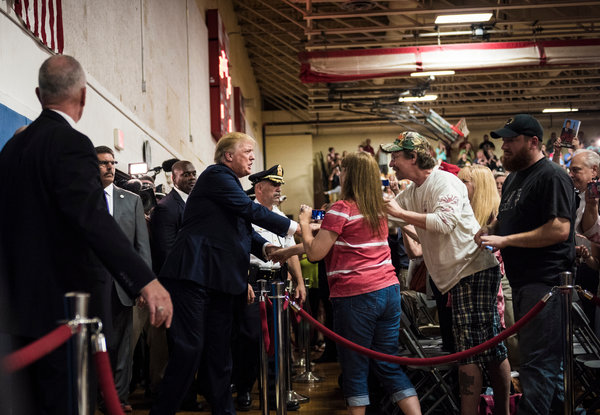 The last two Republican presidential primary contests have followed the same script: A conservative candidate wins in Iowa, a relative moderate wins in New Hampshire, and the latter — with broader appeal and all of the establishment’s resources — outlasts the former in a protracted fight for the nomination.

But so far this cycle, New Hampshire’s voters aren’t playing along. Donald Trump has led every poll in New Hampshire since June. Candidates like Marco Rubio and Jeb Bush have struggled to get out of the single digits.

The weakness of mainstream candidates in New Hampshire poses a big challenge for the party’s beleaguered establishment. If a candidate acceptable to the party can’t win New Hampshire or Iowa, the G.O.P. will face a bleak choice: undertake the daunting and expensive task of mounting a come-from-behind effort, or grudgingly acquiesce to a candidate it really doesn’t want, like Ted Cruz, but who may be better than someone it can never accept, like Mr. Trump.

The extent of the weakness of the establishment in New Hampshire is a striking departure from recent contests. In the polling data that The Upshot has collected from the last three Republican primaries, no one other than Mitt Romney, Rudy Giuliani, John McCain and George W. Bush led even a single New Hampshire Republican poll in the year ahead of the contest. Not only did surging conservatives like Rick Perry, Rick Santorum, Herman Cain and Newt Gingrich never lead, but they also didn’t usually come close. After all, this is a state where Jon Huntsman won 17 percent of the vote in 2012.

Donald Trump arriving at a campaign event in Rochester, N.H., in September. He has been leading in polls in the state since June. Credit Ian Thomas Jansen-Lonnquist for The New York Times

The traditional strength of the establishment in New Hampshire is underpinned by all of the state’s demographic characteristics. Self-identified moderate voters made up approximately half of the electorate in the last three contests, according to exit polls, compared with about a third nationally. Evangelical Christians, who represent a majority of Republican voters in the South and Iowa, represent around one-fifth of G.O.P. voters in New Hampshire.

How is Mr. Trump doing so well? He’s drawing on many moderate and secular voters who haven’t supported the anti-establishment but usually religious candidates who have fared well in Iowa. The same pattern emerges in national polls, which often show Mr. Trump faring best among self-described moderates.

But the G.O.P. establishment then was not in anywhere near the danger it is now. This year, the “outsider” candidates, like Mr. Trump, Mr. Cruz and Ben Carson, possess as much organizational, financial and personal strength as the establishment candidates, or maybe more. This year’s schedule affords the party few opportunities to make a comeback: The contests after Iowa and New Hampshire — the Nevada caucuses, South Carolina and the predominantly Southern states on Super Tuesday — are all relatively favorable to conservatives. This year’s establishment candidates have shown far less strength, by any measure, than Mr. Dole or George H.W. Bush, who had the resources, name recognition and party backing to survive early setbacks.

Mr. Trump is generally polling in the mid-20s in New Hampshire surveys. The large number of moderate, establishment-friendly candidates competing in New Hampshire might split the mainstream vote, preventing any one candidate from consolidating enough support to win.

Many of these candidates have little chance to win the nomination, and some, like Chris Christie and John Kasich, barely register in national polls. But over all, Mr. Christie, Mr. Kasich, Jeb Bush, Mr. Rubio and Carly Fiorina combine for nearly 40 percent of the vote in New Hampshire polls, compared with around 25 percent in national surveys. There’s no guarantee that these voters, if their favorite exited, would coalesce behind any one of the other candidates in that group, but surely the establishment would be in a better position if there were not so many viable candidates competing for support in New Hampshire. Right now, there’s no good reason for any of them to leave.

All of this creates a lot of danger for the party’s establishment. Its worst-case outcome is what the polls are already showing: a clear win for an unacceptable candidate, and the other candidates so evenly split and so far behind that the contest fails to clarify which candidate the establishment should coalesce behind. But there are other dangers, too, like the possibility that a relatively moderate candidate, like Mr. Kasich, could finish above mainstream candidates who are more acceptable to the establishment.

The best case for the establishment, of course, would be if a mainstream candidate won the state and became the clear favorite of party elites in the process, but a strong second-place showing by an acceptable candidate would probably suffice. A strong second place for a candidate acceptable to the party would winnow the moderate wing of the field and position that candidate to ultimately consolidate party support and take a lead later in the primary season.

There is a lot of time left until the February primary and just as much precedent for late movement. In 2008, Mr. McCain overcame a 15-point deficit over the final month of the race to defeat Mr. Romney by a comfortable margin. In the last cycle, Rick Santorum was polling in the single digits at this point in Iowa, but he ultimately surged in the final weeks to defeat Mr. Romney. There is enough time for Mr. Trump to fade, even if just by a little, allowing someone else to win. There is enough time for an establishment candidate to break out. There is even enough time for momentum and tactical voting to cause voters to consolidate behind a single candidate.

So far, though, none of this has happened. Until it does, the establishment’s path to victory will look much longer than it has in any recent contest.