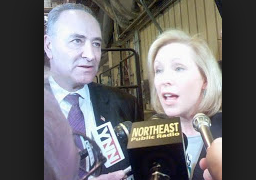 New York lawmakers and advocates are calling upon Congress to renew a law that provides health benefits for first responders who grew ill after the Sept. 11 terror attacks.

The Zadroga Act expired last month but has enough funding to last another year.

The legislation provides medical monitoring and treatment for those who responded to the attacks.

U.S. Senators Charles Schumer and Kirsten Gillibrand, Mayor Bill de Blasio and members of the House of Representatives rallied for the bill Sunday in Manhattan.

They were joined by firefighters battling cancer as well as relatives of first responders who died from Ground Zero-related illness.

Lawmakers say they want the law renewed before Congress goes out of session this week.

It has been blocked by the Republican leadership in both houses of Congress.